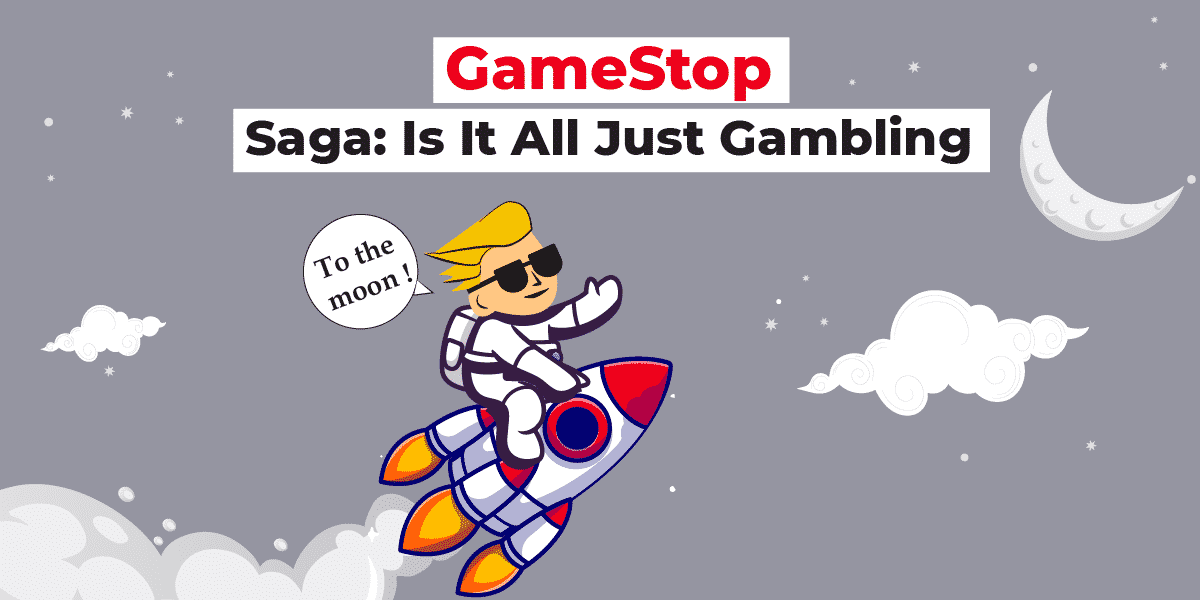 The GameStop Saga showed that the internet could drive share sales high and kill investment as to what happened to hedge fund investors. Read on to understand the similarity of GameStop to gambling.

The internet drives people in and out of business, as has been experienced on the GameStop saga. The recent GameStop story has brought to life the trading war between Reddit followers against Wall Street and high-profile hedge funds organizations. The players got pitted against each other in-stock purchase war that saw the valuation of GameStop rise exponentially in the space of few days.

The GameStop saga saw the stock bigwigs like Microsoft founder Bill Gates commenting against the move by Reddit followers likening it to gambling. We are experts of the iGaming niche and we investigate and analyse various topics that are in close connection with the gambling industry. In this article, we will explain to you why GameStop can be considered a form of gambling.

What Transpired in the GameStop Saga

GameStop is a renowned game retailer whose shares were trading below C$20 per share in early January. By the end of January, the value of the shares had skyrocketed and surged to more than 2300% in value.

Let’s take a closer look at the table to clearly see GameStop’s stock price evolution from 30th December 2021 until 24th May 2021.

GameStop, for a long time, has been one of the most-bet-against stock on wall street. However, some retailers discovered the technicalities to a short squeeze and decided to pounce.

GameStop held a campaign aimed at increasing the value of its shares. Reddit users and online investors rushed online and bought its shares outright or purchased the call options. The repo effect was that the increase in GameStop’s share value sent many short-sellers, especially the hedge funds, scrambling. The hedge funds organizations were outnumbered and out bet by Reddit users who had a point to prove to Wall Street.

The short sellers decided to borrow shares of stock and immediately sell them back into the market to change the bidding war. They borrowed intending to repurchase them later and still make a profit. However, the Reddit followers using their social media hashtags outnumber the hedge fund corporations forcing them to buy the stock at the right price to reduce losses.

Robinhood, an online trading platform, succumbed to pressure from Wall Street by limiting buying GameStop shares on their platform. This was met with a great adversary from online players who demanded that free-market be exercised per the rule of law.

Elon Musk, the billionaire founder of SpaceX and Tesla, was in the middle of the saga calling Robinhood CEO Vlad Tenev to spill the beans on why they were limiting the “meme stocks.” Vlad Tenev tried to explain how they were arm twisted by significant players in the stock industry to stop the trading of GameStop shares from their platform.

The move was seen by many as a significant coup by the masses taking power from the corporations. The Reddit followers did not stop there as they turned the fortunes of several companies whose shares have been driven to the ground by wall streets like Micro vision and Rocket Companies (RKT).

Whether buying stocks and shares is a form of gambling is debatable, especially now with the GameStop story. Buying stocks and shares is seen as a legitimate way of making passive income. Many bright individuals use it to move excessive capital around. Most traders risk their money to back business with potential by buying their shares. However, they can also drive the share value of other companies by selling short their shares in masses.

Trading in shares has been glorified in many Hollywood movies. Many see it as a legitimate business that can make you super-rich if you invest wisely. Many young individuals have more money on their hands and are using it to support online stock. That has seen a surgeon share values of companies like Amazon and Apple.

Gambling, on the other hand, involves speculation on the outcomes of specific odds. There are various ways gamblers use to determine the results. However, gambling is not considered a legitimate way of wealth creation. Many people like Microsoft Founder Bill Games criticize it.

However, the Latest GameStop Saga has proven that trading in stocks and shares can be considered a gambling venture, something that previously was unheard of. The number of online traders for online app Robin Hood rose from half a million users in 2014 to 13M in 2020, thanks to people trading online. However, after they hijacked the trading of GameStop and drove the share value sky-high, they beat wall street to their game. Wall Street had to retaliate by putting sanctions on Robinhood App, thereby influencing the outcome of “free trade.”

In gambling, major players always have the upper hand when it comes to winning. In most cases, the house has the better odds such in the case of Live Casinos, which we’ve thoroughly analysed and listed. However, the system rigging by Reddit followers hijacking the online trade to save GameStop shows the masses might be against the corporate.

There is a thin line between gambling and stock trading. In most cases, the extremities can be considered a vice. As experts in this domain, we believe that a stock investor is a glorified gambler who would fit in both if it were left to their devices. That is why the debate will continue considering heavyweights like Elon Musk and Billy Gates remain pitied against each other concerning the GameStop saga.

Why the Gamestop saga is a form of gambling?

Reddit hijacked the stock purchase of GameStop, a retail company skyrocketing the value of its shares in a span of a few days. Many wall street investors have been making money selling short GameStop shares. However, they bought the shares heavily to bankrupt hedge fund corporations and saved the game retailer.

Below are reasons why you can equate GameStop Saga to gambling.

Let’s take a closer look at each one:

Many economists and global CEOs came out to condemn the issue with others in support of the movement. Bill Gates, the founder of Microsoft, is one of the people who think the GameStop saga a joke. He goes on to call gambling a Zero-sum game, just like a casino and not an investment. He continues to say that the only lucky people are those who get into the game first.

Bill Gates sees the GameStop saga as a game aimed at driving value way beyond what is rational. The only people who succeed in such a saga are the pioneers, while those who come in last may feel short-changed. He thinks that the mass has time and resources and that social media rigged the purchase of the shares. He does not believe the system is sustainable and compares it to gambling.

3.     Borrowing stock and selling it back

The short sellers acted like gamblers by borrowing shares of stock and then promptly selling them back into the market. Their intention was for them to purchase the shares back at a lower cost. After that, they would have returned the borrowed shares and keep the difference as profit. However, when Reddit followers teamed up with other social media users to buy the claims, the hedge funds were forced to buy at a loss or lose altogether.

The way Wallstreet acted to sanction the Robinhood app was reminiscent of a gambling scene. Wallstreet openly manipulated the stock market outcomes by playing a hand in the suspension of the sale of GameStop shares on their platform. Similar accusations have been levelled against gambling agencies. Still, since most people don’t consider gambling legal, it ends up under the radar.

Gambling is a risky affair if not treated with cautiousness. But, despite many people knowing the volatility of GameStop shares, they still continued in the risky speculative frenzy and maintained it for a long time. Gambling and investing are win-or-lose businesses. Whether done in wall street, in a casino, or online the outcomes are similar. Both can make you reach but can still equally bankrupt you.

Like in gambling, the small investors are pitied against the corporates. They have very little influence on running the show in most cases. However, the internet has changed the system. A shift could be expected with the Reddit investors targeting other businesses to invest their money in.

The GameStop stories opened up many online shares of investment possibilities. The saga brought us a showdown between the masses led by Reddit users against the mighty wall street. The unprecedented rise of the GameStop shares after a campaign drove its shares to the roof in a matter of days. Many celebrities like Billy Gates were against the movement terming it a zero-sum game. On the other hand, Elon Musk was unhappy with the twist of events and even contacted the CEO of Robinhood for grilling to know what happened.