Go deep into the Greek Mythology and meet the three Fates with the free slots Age of the Gods: Fate Sister. The three mythical ladies spun, measured, and cut the thread of life of every mortal and will fairly determine your win share if you’re brave enough to spin the reels of their game.

Age of the Gods: Fate Sister

Flip the phone to play

This is among the latest expansions released for the popular franchise developed by Playtech. Concentrating on Ancient Greeks’ stories, this developer has been trying to put the mythology into a new light, more colourful and interactive than ever before. Judging by the positive feedback and how popular its products have become, we can say that its idea was a real success. But not only the theme contributed to this fame, as the whole game is a mix of features:

There’s no mythology better known worldwide than Greek Mythology. But, as popular as it is, there are still not many slots developed based on its stories. Of course, This free online slot is one exception. This game portrays, through its eye-catching colours and graphics, the story of Moirai, the immortal daughters of Zeus.

The three sisters, often known as The Fates, were the incarnations of destiny. Lachesis the alloter, Clotho the spinner, and Atropos the unturnable were controlling the mother thread of life of every mortal from birth to death.

Bound to tell their story in this free online slot machine, the 3 of them do more than that. They show up on your reels and control your fate and fortune. Of course, they’re not alone, as their thread, scissors and portal towards the mortal world are visible. In total, the game boasts with 13 different symbols, 6 of which are symbols inspired by the Poker cards and implemented to offer some more diversity.

Okay, visuals are just on point, the symbols are looking amazing, how about the sounds? You don’t even have to ask about that, because they’re magnificent and will send you back in time from the very first moment you started the game. Just like all the other titles from the series, this one has also been created to impress and offer the real feeling of playing together with the gods. 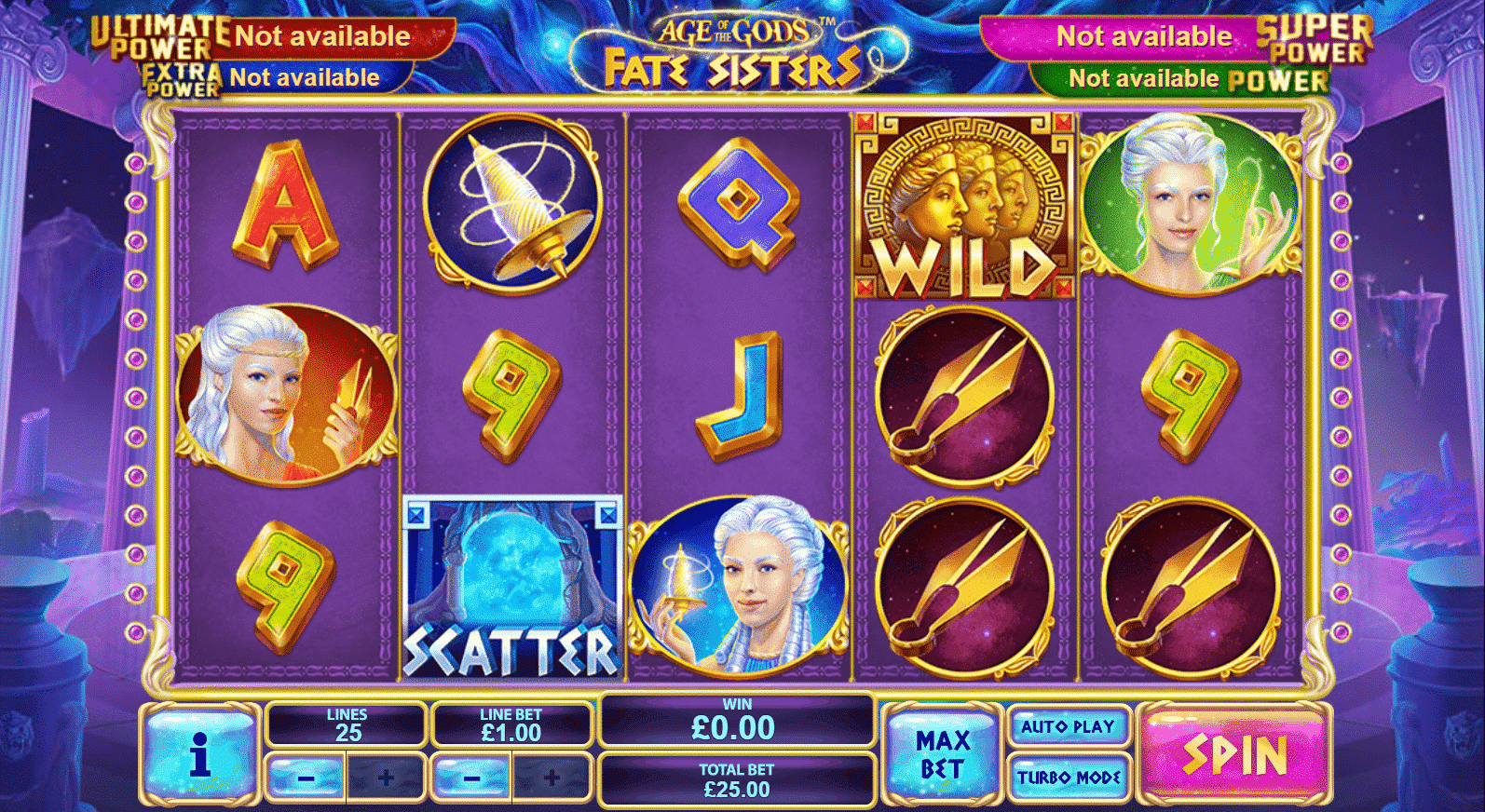 Although it’s subject is very advanced, we must not forget that this is, in fact, merely just a game. A very lucky game, we could add, but still, just a game. And like any other game, it has stakes and winnings. Note down that when you play Age of the Gods: Fate Sisters slot for free, your line bet will be multiplied a few times with every win. The multipliers are applied only when 3 or more identical symbols land on a payline and may vary between 3x and:

We hope you did not forget that you can only enjoy here the Age of the Gods: Fate Sisters slot machine free play version. Just like all the other games we offer, this one as well uses only fictive credits which cannot be deposited or withdrawn. Their purpose is to provide the necessary means for you to have the ultimate gambling experience.

Just like the 3 sisters of fate, the special features have the ability to make you rich beyond comprehending. Their instances were created to add a pinch of excitement to the already exciting slot machine and the results are simply phenomenal. Each special feature was designed to impress you, and every win obtain through them will leave you in awe. But what exactly do they do? Let’s find out!

Do you feel ready to dive in right into the story and find out more about how the daughters of Zeus can influence your fate and fortune? Regardless if you play the Age of the Gods: Fate Sisters mobile version or the computer one, you’ll get to enjoy the very same perks either way. Both are just as good as the other one and to play them, you only need to:

Being huge fans of Greek mythology, we were extremely happy when we found out that Playtech decided to develop a slot game based on the antique legends of Olympus. This exceptional title impresses through its stunning high-definition graphics, mesmerizing soundtrack, and really entertaining features. The 3 goddesses know exactly how to entertain you, that’s why we invite you to try out Age of the Gods: Fate Sisters play for fun and enjoy all the perks in has in store for you!