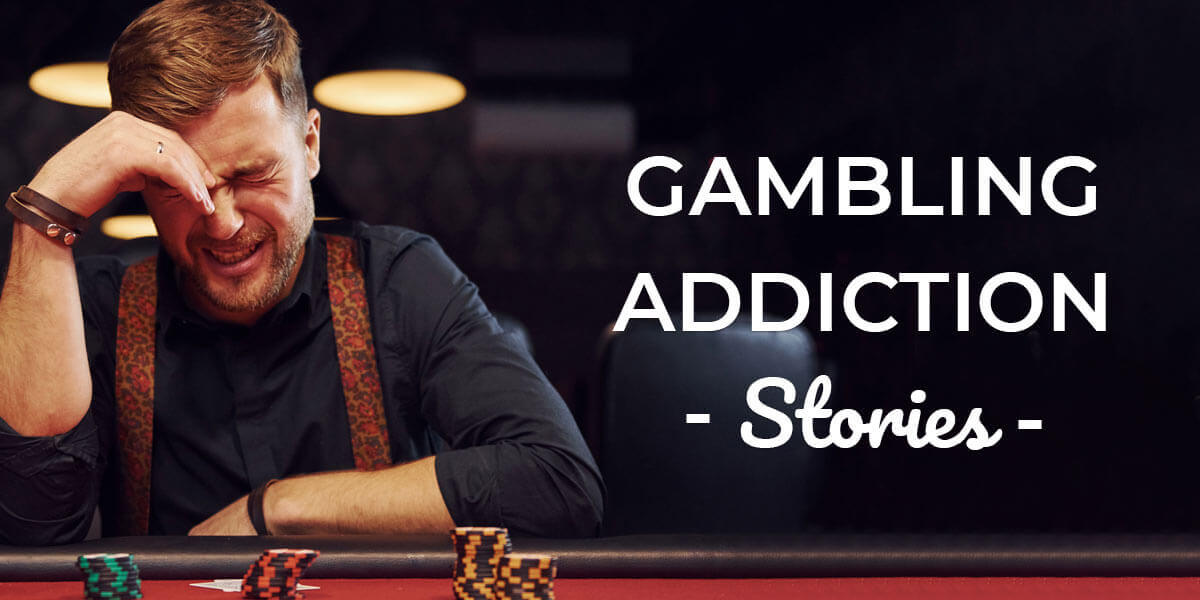 Gambling addiction stories might be a bit gloomy, but knowing what compulsive behaviour at the casino can do to your brain and life will help you in the long run.

Once you get a better understanding of the consequences of addictive gambling behaviour, you will learn to control your urges and play responsibly.

We know that gambling can become tempting if there is not enough discipline. On top of that, studies show that compulsive gambling might occur more often in people with substance abuse history, and some doctors even classify it as a sign of OCD or bipolar disorder.

Addiction stems from two different reward pathways in the brain that affect a person’s behaviour – wanting and liking.

All addicts have something in common

After analyzing hundreds of gambling addiction stories, we’ve found some similarities and identified a pattern. All compulsive gamblers regret that they ruined their relationships with their loved ones more than the amount they lost.

Fortunately, science is on the verge of finding a cure for addiction. Soon enough, casinos will become a form of entertainment for everyone, rather than a way to make quick and easy money. Let’s have a look at stories from gambling addicts that have managed to overcome their problems:

Tony and Prof David Knots – The mind of a gambling addict

Professor David Knots, a specialist in addiction treatment, considers that gambling addiction is not a failure of will but rather a brain disorder preyed upon by the casino industry. Once you’ve become addicted, it will be difficult to stop in an instant.

The reason why addiction can be dangerous to people is the fact that it changes the brain to become entrained in the desires of casino games. Prof. David Knots developed an experiment to show the world precisely what happens with the brain during a gambling session.

How the experiment was conducted

The professor revealed what was happening inside Tony’s brain as he used a keypad to place bets at a simulated roulette while inside an MRI scanner. Tony is a compulsive gambler who collaborated with Dr. David Knots to overcome his addiction.

During the experiment, Prof. Knots showed us how brain parts get turned on during a casino session, and they can’t be shut off. He presumes that the gambling mind involves a chemical basis since the habit centers are over-activated compared to an ordinary mind.

Let’s have a look at the results of Tony’s brain activity during a roulette session:

The brain wasn’t very active during the betting round, but instead thinking, “What shall I do?”. According to Dr. Knots, the mind was relatively calm, and there wasn’t much going on.

In contrast to the bet session, during the roulette spin, the visual system, located in the back of the brain, is intensely stimulated. The change happens in a matter of seconds.  Tony is focused on the ball, hoping it will come down on the colour where he placed the bet.

Once he analyzed the results from the MRI scans, David Knots noticed that the emotional regions, which are different places, are activated during the spin.

The anterior singular cortex and the insular are two areas responsible for making sense of emotions. These regions generate the feeling of excitement, making your brain think, “Will I win or not?”

The only noticeable difference between winning the bet and anticipating happens in the area that manages the sense of satisfaction. In essence, the brain will think, “I won, now it’s time to try again!”. However, winning and waiting to see if you’ve won (the anticipation) are pretty much identical.

The key point about gambling is that for the brain, winning isn’t the only thing that counts. Repeatedly taking part in bets when you’re losing stimulates the mind at the same intensity as winning.

When you’re betting at a fixed-odds terminal, your brain gets these stimuli every 20 seconds, which means you will get hundreds of them during a regular session. Eventually, the process will become habitual, turning into an addiction.

Daniel – From millionaire to compulsive gambler

Daniel is a gambler who admitted that he is unable to stop once he hits the casino. His addiction didn’t start with bookmakers or casinos. It was already part of his behaviour.

Daniel is a former investor that made a fortune from speculative stock trading. By the age of 25, he was living the dream, having over one million dollars, a trophy wife, a large house, several expensive cars, and a lot of extra cash to spend on luxury goods, which could make him feel special.

Anyone can fall into addiction

Despite being a self-made millionaire, Daniel fell into the trap of gambling. He tried everything to control his urges, but instead, the stakes were constantly increasing. Soon, it was clear that he was hooked to casino games, in addition to his developing alcohol and cigarette addiction.

His explanation for this compulsive behaviour is stress.

Online or offline – addiction is the same

His first thought was that avoiding the temptations from land-based casinos and interactions with croupiers would prevent addiction. But that was not true at all! He started with online poker, and the stakes were continually increasing.

Shortly after losing everything he had left, he lost support from his wife and family, emptied their joint account where they were saving money for holidays and school fees. Then he started stealing from work and his family. He was out of control.

Luckily, he joined a responsible gambling program and barred himself from online casinos. Daniel told us that the money lost can be made back, but you can never take back the damage done to people close to you.

Matthew was a college student at Leeds University who had a burning desire to win the huge pot. He got so deep into gambling that he could no longer afford to pay his rent in less than a year and was forced into leaving without graduating.

After failing college, Matthew found an entry-level job and kept using his income to fuel his gambling addiction. Once he realized that he could no longer stay in Leeds, he moved back with his mom. He continued on the dark path of compulsive gambling, taking loans, and using credit cards to make payments.

Friends and Family can help a lot

He spent most of his life gambling in secret, hiding his addiction from his wife and family. But Matthew had a guardian angel! His wife got in touch with the Gamblers Anonymous association. They were more than happy to help him overcome his issues.

According to Matthew, exercising was the most significant help in his recovery. He realized that he should avoid gaming at all costs for the sake of his loved ones.

Since his recovery, Matthew became a supporter of gambling awareness. He believes that the government should warn people about the risks of compulsive gambling and ban advertisers from making illusory promises to the players.

Hopefully, these gambling addiction stories shed some light on the consequences of betting too much. According to the Association of British Bookmakers, 99.5% of people gamble responsibly. Addiction is a complex and multi-faceted disorder, so the gaming industry is focused on encouraging responsible gambling.

While statistics show that gambling addiction does not represent a significant issue, you should always stay gambling aware and choose a casino that has an exclusion mechanism that allows you to quit whenever you feel like it.

Dicipline and responsability are the key

Our recommendation is to set a monthly budget for casino expenses and make sure you never spend more than you can afford. If you feel overwhelmed or can’t stop spending more than you should, make sure you reach out to a responsible gambling organization.

Contacting a specialist will help you overcome your addiction more easily and view gaming as a form of entertainment rather than a direct source of income.

BBC News – Inside the brain of a gambling addict