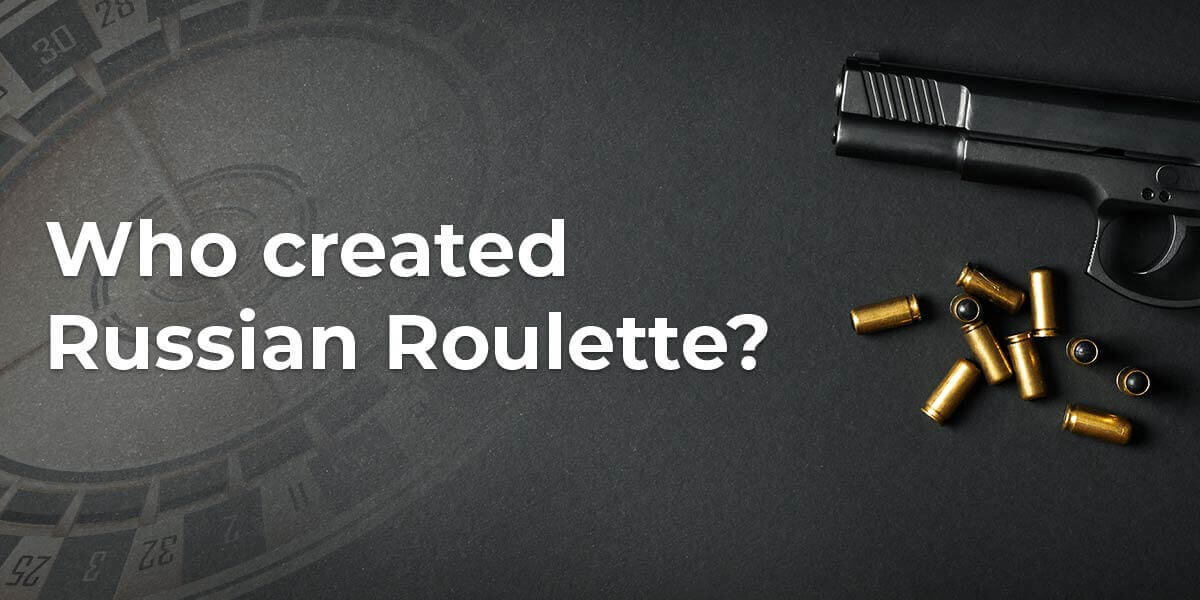 The Russian Roulette is a deadly game popularized in movies and television. Essentially, each participant takes turns squeezing the trigger of a revolver pointed at their head, which only has one round inside.

But who created Russian Roulette? According to historians, it was invented in the 19th century, when Russian correctional officers were forcing inmates to play and bet on the result. Read on to discover the origin story of this deadly game.

Be advised that the information in this article is for entertainment purposes only. Do not try to replicate anything at home.

For a safer alternative to Russian Roulette, we recommend our customers to browse through the comprehensive roulette bonuses list where all the crucial information is presented, to make wiser decisions.

The origin of Russian Roulette

Even though this dangerous game can be traced to 18th and 19th century Russia, the exact moment it was invented is still unclear.

Lermontov – “Hero of Our Time”

This deadly game of chance was first mentioned in 1840 in the last chapter of the novel “Hero of Our Time,” written by the Russian poet Lermontov.

Since the author was a Russian officer who served in the Caucasus, a large part of the facts and stories are autobiographical, which means that the story might have some factual background behind it.

If these facts are correct, the story fits quite well, as this deadly game spread among officers on the Caucasus in the early 1800s, during Lermontov’s time. However, he never actually calls it Russian Roulette. The gun involved was a flintlock pistol rather than the commonly used revolver.

The officer takes the gamble, but the gun doesn’t fire because the flash powder was wet. Lucky, huh?

Another obscure mention of this deadly roulette game was found in the biography of general Skobelev, who lived between 1843-1882 and fought many Russian-Turkish wars in the 1870s. Skobelev was aware that officers were playing this risky game and unofficially approved it as a display of bravery.

However, he was forced to punish it severely because of a particular order from emperor Alexander II. The latter asked him to demote any officer involved in this game to the soldier rank. Getting demoted was considered shameful since officers were mostly nobility, and soldiers were mainly peasants.

The term Russian roulette was made public in a short story written by a Swiss author named Georges Surdez, published in 1937 in Collier’s Illustrated Weekly, the most influential literary magazine.

While Surdez isn’t the one who created Russian Roulette, he coined the term inspired by the French Foreign legion romantic stories he used to read as a child.

His novel tells us the story of a German soldier that attempts to cover up his Russian partner’s suicide from a gunshot. In a letter to his superior, he explains that the deadly roulette game caused the death of his comrade. This game was a common form of gambling among tsarist army officers during their last days of serving in WWI.

Versions present in the story

In his story, Surdes tells us that the Russians would take out their revolvers, remove one of the rounds, spin the barrel and squeeze the trigger with the gun pointed at their head. At the end of the story, the German soldier plays a variant that features one bullet inside the barrel instead of five.

To this day, it remains unclear why Surdes decided to change the game rules and thought it would be better to play with one bullet instead of five. However, a reason could be that having only one out of 6 chances of survival isn’t a good deal for anyone.

The one bullet version is the one that remained and became a part of pop culture at the end of the 20th century.

Believe it or not, Surdes’ story is responsible for the death of over 2000 people.  Many people started playing it after his novel got reposted in Fiction Parade & Golden Book Magazine. The first known victim is a 21-year-old boy called Thomas Markley, who shot himself in the head.

But did you know that celebrities also lost their lives to this deadly roulette game? Below, we’ve made a list of the most famous people that died playing this game:

John Marshal Alexander Junior was a famous blues musician in the US. He shot himself during the 1954 Christmas Day after finishing a yearlong tour during a show that he was performing at the City Auditorium in Houston.

Even though the eyewitnesses said that he was playing with his 32 Cal revolver under the influence of alcohol, the police reports stated that the cause of death was a Russian roulette game.

The cast of a famous TV series called “Cover-up” witnessed a very tragic accident. In one of the breaks between filming, John-Erik Hexum was playing with a revolver loaded with blanks in the backstage. He pointed the gun at his head and was pretending to play the deadly game of chance.

Even though no projectile came through the barrel, the shockwave created by the 44 Cal Magnum was so strong that it fractured his skull and bone pieces flew through his head. Hexum was immediately taken to the Emergency Room only to be pronounced brain dead.

According to the investigating reporter’s findings, the actor’s mother’s father served in the Queen’s Cameron Highlanders in Malaya. He was believed to have passed away because of a discharge that occurred while he was cleaning his revolver.

The information the reporter found while digging into the actor’s family history proves that the reason for his grandfather’s death was the roulette gun game, which was usual for British soldiers.

Russian Roulette in the Pop Culture

This deadly game of chance made its first public appearance in pop culture in 1937, and it has quickly become an essential part of it. Generally, the term is used as a metaphor for an action that is not worth the risk.

You can find references in cartoons, songs, books, and artwork, but the most significant popularity boost comes from Hollywood productions. Let’s have a look at the most popular ones:

The most representative Russian Roulette scene is the one portrayed in The Deer Hunter, a movie directed by Michael Cimino that was released in 1978. The film tells the story of three friends, Michael, Steven and Nick, who enrolled in the US Army in 1968 and were sent to the Vietnam battlefield.

The soldiers are later captured by Vietcong guards and forced to play a three-bullet game of Roulette. After literally dodging the bullet three times in a row, Michael manages to shoot the guards, which is how they free themselves from captivity.

Many critics say that this scene is one of the best representations of the metaphor for the senseless violence, often associated with war.

After successfully escaping the Vietnamese, most people would expect the movie to have a happy ending. However, it turns out that Nick was traumatized by his war experience and stayed in Vietnam.

When Michael returns to take his friend home, he finds him in a bar making a living out of betting on the deadly Roulette. The two main characters engage in a deadly gun game again while Nick tries to save his mates from suicide. The gun eventually goes off, killing Nick and leaving the audience horrified.

Apart from being a Hollywood masterpiece, this movie also sparked controversies about how the US army was treated during the Vietnam war.

However, army officials managed to dodge this media bullet by declaring that there aren’t battlefield reports that prove war prisoners were forced to play this deadly game to entertain Vietnamese soldiers.

While it is still uncertain if the events in the movie took place, “The Deer Hunter” remains one of the greatest works of art that introduced this gun game into the mainstream. While Cimino isn’t the one who invented Russian Roulette, his movie is, to this day, the most referenced title when the history of this deadly game is brought up.

The less-lethal way to play

While some might agree that Russian Roulette is not the same without a gun, people have discovered less deadly alternatives that don’t involve losing your life.

There are certain products available that simulate the action of the game without the possibility of killing anyone.

You can get a revolver that uses balloons instead of bullets. Every time you squeeze the trigger, more air goes inside the balloon. Eventually, the balloon will explode. The most dangerous thing that can happen to you is going slightly deaf for a few minutes.

Others have invented drinking games, such as the one in which “the gun” is a plate of six shot glasses (representing the chamber), and one of the shots is straight vodka. There are also child-friendly variants of the game, which involve pulling marbles out of a bag or rolling the dice to see who gets the bullet, which essentially translates to losing.

In case you’re considering playing the original version of the game with your friends, please remember that the legislation generally considers it a genuine risk to life. Many of the surviving players were convicted of murder.

For those that love that thrill of betting against the odds and trying to make as much money while at it, we recommend you visit this page and discover the latest casinos with a wide range of casino games, which are less deadly alternatives to the Russian Roulette.

On a lighter note, remember that 5 out of 6 people enjoy Russian Roulette, statistically speaking. However, this isn’t entirely true because the survivors will be held responsible for any death. So you wouldn’t be able to enjoy the money you’ve made because you would be immediately arrested.

We hope this article helped you understand that this foolish game is more of a metaphor than a way to gamble.