The Origins and History of Video Poker 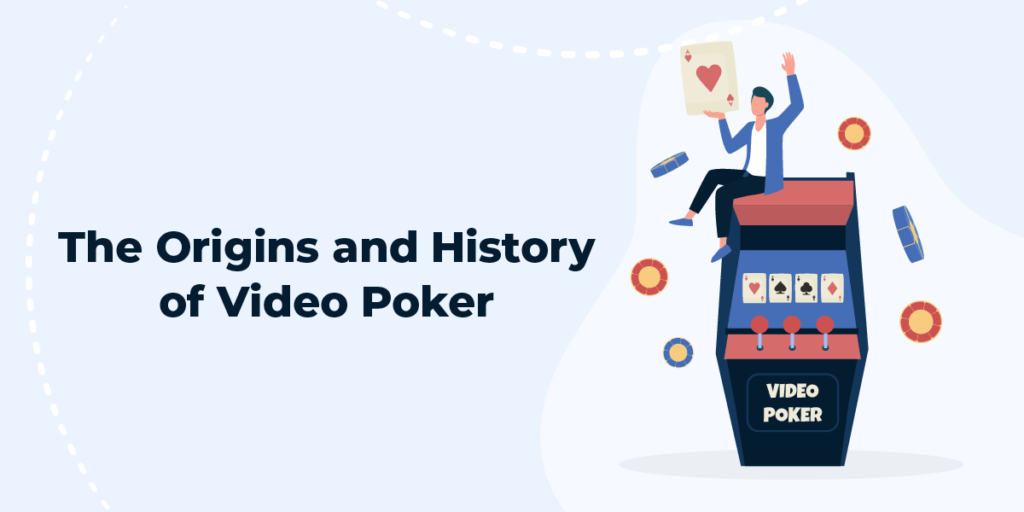 Video poker is one of the most recent game types to join the casino floor. Since its first introduction in the early 1970s, video poker’s popularity surged to the point where its presence is indispensable from any reputable casino. Even in the internet casino era, the game remains one of the most in-demand casino titles ever created.

Keep reading to learn more about the history of video poker!

Even though it wasn’t until the 1970s that the video poker machines were first introduced to the masses, the concept was created long before that moment. The first mechanical poker machine was released in the late 1800s. Still, the technology at that time was not advanced enough to make the game viable at larger scales.

The inventor of the original video poker machine is Sittman and Pitt Company, which is based in Brooklyn. The initial version was more similar to a slot machine – it had five-reel, each with ten playing cards. To play, you would have to insert coins and pull the lever to make the reels spin. When the rotation was over, each reel would stop on a card and form the poker hand.

Years later, Charles Fey, known as the “father of slot machines,” invented “Card Bell,” which was similar to the initial version of video poker. Still, it came with an automatic payout feature, which would give up to 20 coins reward for a royal flush.

The concept was further refined at the beginning of the 20th century when Fey created a new and updated game called “Skill draw,” in which players could “hold” the cards. After spinning the reels once, gamblers had the option to hold one or more cards and then draw again, hoping that their hand would improve.

Skill draw is considered the first 5-card draw poker machine, which was somewhat similar to those in casinos today. Sittman and Pitt started creating their version of the machines with the hold and draw features. The game became so popular that the company couldn’t fulfill all the orders.

The main reason why the poker terminals were so popular in the early 1900s is that they were commonly placed in cigar and liquor stores, so everyone would stop by to try their luck spinning the reels.

While back in the day you would have to go all the way to the liquor store to enjoy some gambling action, nowadays you can simply open up your internet browser and instantly have access to a wide range of casino games from the comfort of your home. If you want to hone your skills and take your game to the next level, we highly suggest choosing a title from our video poker free play collection, where you can enjoy some reel spinning without having to deposit or download anything.

Classic poker machines – not a good deal for the player

In the 20th century, gamblers didn’t care too much about the return to player percentages or winning odds. Thus, the game’s design was purposely made to reflect the lack of gambling knowledge of the average casino player and had only 50 cards available, despite being marketed as a 52-card deck based video poker machine.

The game creators would eliminate the ten of spades and the jack of hearts, making it impossible to get a royal flush with these two card suits. What’s even more interesting is that video poker was prevalent, even though gambling activities were strictly forbidden everywhere in the United States. Therefore, winners were given non-cash rewards, such as drinks or cigars. Even today, this practice remains common in some rural gambling parlors, where winners are issued a reward that can be later exchanged for money at a broker nearby.

Today, all video poker games use Random Number Generator software to ensure that they play in a safe and fair environment. After all, the video poker machines are known for having the lowest house edge in the industry, meaning that you will pay less money to the casino operator in the long run.

Check out our poker sites section, where our team of casino analysts has put together a step-by-step guide on how to pick a regulated gaming platform without having to worry that your data or money is at risk. The internet is a powerful tool for seeking information, as it allows you to check the viability of a casino before joining it. By reading our guide, you will learn how to make a more informed gambling decision and get the most out of your casino promotions.

What was the first version of electronic video poker?

After digging deeper into the history of gambling, our experts have discovered that the term “video poker” was coined nearly 70 years later after the invention of poker machines. Dale Electronics was the inventor of the “Poker-Matic,” which is widely regarded as the first casino game that uses a television screen to show cards generated by a computer program.

The casino industry thought that Poker-Matic would be a hit, so every gambling avenue had these machines installed on their premises. However, the audience was quite skeptical, since at that time, technology was still in its infancy and people were having mixed feelings about trusting computer software.

It wasn’t until William Redd, one of the distributors for Bally’s Casino in Vegas created a new version called “Video Poker,” when the game actually became the star of the casino floor. William Redd’s version was inspired by the famous five-card draw game Jacks or Better and somehow managed to get a patent for it, making him a millionaire within a few years.

Bally’s executive board turned down Redd’s pitch, thinking that Video Poker would end up similarly to Poker-Matic. They were wrong. By the 1980s, his game was considered one of the best casino titles available in all of Las Vegas, and everyone was in for some card drawing action.

Knowing that he found the golden nugget of the casino industry, Redd decided to start a gambling hardware manufacturing business called SICOMA, which was publicly listed on the stock exchange in 1981. He later changed the company’s name to International Game Technology (IGT), which is to this day, one of the most prominent game providers around the world.

Despite the release of new innovative features and high-quality graphics casino games, video poker remains to this day one of the most impressive titles. You can enjoy the game in land-based and online casinos. The newer versions are even optimized for mobile devices, meaning that you can try your luck while transiting to work.

The real evolution of video poker is related to its variations to the rules.  While the old-school version required you to get a hand with 2-pairs or better to win, some versions of the game now allow you to win with a single high-ranking pair, such as the highly popular Jacks or Better variant.

Today, you can choose from hundreds of versions, all having different rules and strategies to improve your odds. Another exciting addition to the video poker collection is multi-hand games, in which players can play up to 100 hands at a time, bringing even more fun to the table. You can learn more about the game in our in-depth poker guide, where we will explain the exact strategies used by professional players for consistent results.

Video poker has an incredible history, going from a poker machine with only 50 cards that were usually placed in liquor stores to being the most popular game in Las Vegas casinos.

Even in today’s technology-driven world, where there are countless options to choose from that have more advanced features and better graphics, many players prefer playing a game of Jacks or Better or Deuces Wild.

If you’ve never played video poker before, we highly recommend trying it out, at least in the free version. We promise you won’t regret it!