It is Official! Too much video games equal addiction 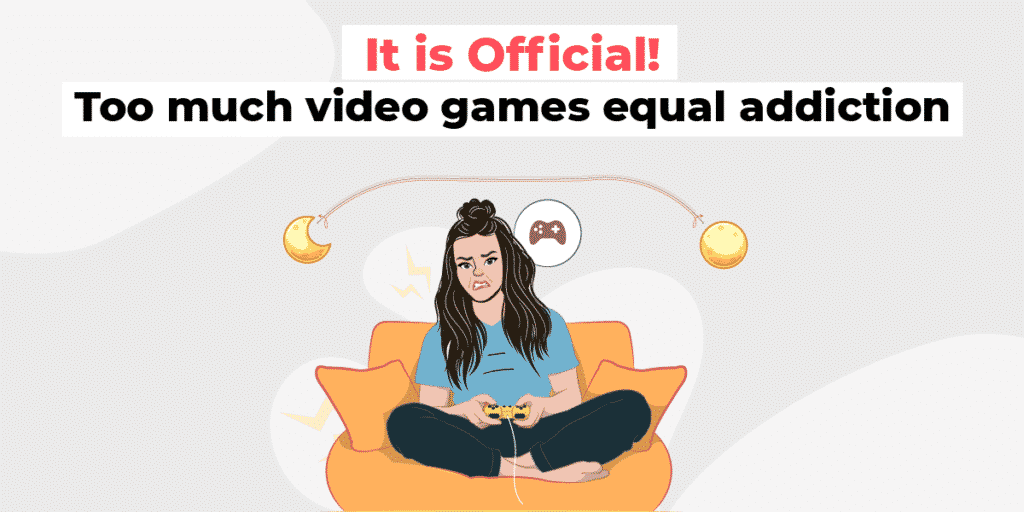 Do you like playing Video Games? Know when to stop as Video Games are officially an addiction. Learn with us the symptoms and how to prevent it!

Video games are a pleasant way of passing the time and a great way of bonding with family and friends. However, too much time spent on video games can bring some unwanted consequences that are often difficult to reverse. Some of the results include video game addiction.

Scientists define it as problematic and compulsive use of video games that often impair a person’s ability to function properly in life. It is a common condition among the younger population. Research has it that the release of dopamine can at times cause this disorder. It is a feel-good chemical discharged in the brain when a person gets some success or achievement in their lives.

Dopamine is also responsible for a series of other addictions, such as alcohol and many others. Since many video game players compete against their friends to win a prize, this trend may lead to addiction since dopamine is released each time they get a victory.

In some ways, gambling addiction is similar to gaming disorders. Gambling addiction can be referred to as compulsive gambling, where an individual is obsessed with casino games. Our experts have prepared a self-assessment test to help you recognize it.

Besides this, our iGaming specialists have analyzed 123 titles to find gambling in video games and discovered that all of them had betting features incorporated. It’s better to know beforehand what you’re playing.

This is often a problem because it can lead to bankruptcy and various other life problems. Scientists researched this topic and unearthed that persons affected by gambling addiction often have personality disorders, substance abuse problems, and depression. They get to the level of addiction because they crave an escape from the harsh reality.

Video game addiction, however, is also just as dangerous. However, individuals with this disorder are primarily young adults, and they have no clue as they slip into addiction. To them, it is just another day to the game.

This is where the game is just developed to be played by one player, and it involves a set mission or goal such as rescuing hostages from capture or killing some criminals. The addiction associated with these games is related to completing the set purpose or mission to get a high score.

This is where the games are all played online and with other players. The multiplayer games are exceptionally addictive because they have no end, and there is also more thrill that comes along. The players who take part in these games love creating an online character and temporarily live this life. As they continue to play, they build a relationship with the other players to escape real life’s reality.

For some players, this fictional world is the only place they feel appreciated.

It is, however, essential to note that video games are meant to be addictive. It is the only way developers make money and stay profitable because what use is a boring video game anyway?

Many game developers achieve this by making the game competitive, thrilling, and as fun as possible. Providers couple that with installing excellent graphics, and that will make any player come back for more.

However, boredom kicks in in some players, and they get tired of playing the same game repeatedly. Nevertheless, some do not know when to quit, and this often leads to addiction.

There are some symptoms of video game addiction, and you can do self-diagnosis right at home. They include:

It may happen in real life when one cannot control the impulsive urges to game or gamble even when the odds are clearly against them. This is often a problem that leads to excessive spending of money, which will lead to bankruptcy or other issues that you can easily avoid.

Due to the increased desire to play a game, addicted employees may sometimes miss workdays to stay at home and play. Also, addiction leads to a lack of concentration at work which may affect the person’s productivity. Some employees may also complain of increased workload when there is nothing to complain about.

Secrecy among addicted gamers is a common symptom that often has serious repercussions. Addicts will tend to conceal and hide the truth about where they spend both their time and money. This may lead to trust issues developing in the household.

Since gaming takes over your entire life, there is no more room for anything else. Therefore, addicted gamers will always be preoccupied with games, leading to them ignoring their responsibilities to family, friends, and themselves.

If the victim is a student, their academic performance will take a steep drop from what it once was. The reason is that the victim will always be on the game and cannot concentrate on their studies or any school curricular activities. This is a common occurrence among teenagers and some college/university students.

Hygiene is an essential aspect of human life and is necessary for human survival. Therefore, when a person suddenly does not see the need to groom appropriately or maintain a certain hygiene standard, there is a problem. Since the victim’s mind is only trained on winning the game, hygiene and grooming may no longer be a priority in their lives.

This symptom may be the peak of gaming addiction. It is when a player is entirely dependent on the game for their emotional stability and wellness. When the game is removed, they experience withdrawal symptoms like insomnia, loss of appetite, and many others.

It is essential to seek treatment when faced with the mentioned symptoms to commence the recovery process.

Some effects may be realized in the long term and others in the short time.

For instance, in a short-term scenario, some players may lose sleep and appetite, leading to fatigue and hunger.

When this goes on, in the long-term, it may cause sleeping disorders and other diet-related issues that are complex to treat. In addition, people who isolate themselves from family and friends to create time for video games may miss out on important family events in the short term.

However, if this goes on for an extended period, victims may find themselves with no friends at all. This may lead to loneliness.

Some other long-term effects include financial constraints and failure in examinations.

Unlike other forms of addiction, video game addiction may not seem severe. Still, in truth, it is a severe condition that needs prompt action. The first form of treatment is setting time limits, such as knowing what time you will be on the phone and at what time you will drop all electronic gadgets. Secondly, a victim may do other activities during the day to stay focused and not think about gaming.

The other remedy is seeking professional assistance from a psychiatrist. It may go a long way.

Gaming addiction is just as severe a problem as any other form of addiction. It is common in the 21st century due to the increased access to internet connection and electronic gadgets. Therefore, as you proceed to the game, do so with caution.

This is also the case with gambling activities. Both activities are in close relation. Therefore, when starting a session on online casinos, make sure that it is legit and it comes with responsible gambling tools. We’ve already selected them for you. Sill, we always recommend double-checking.