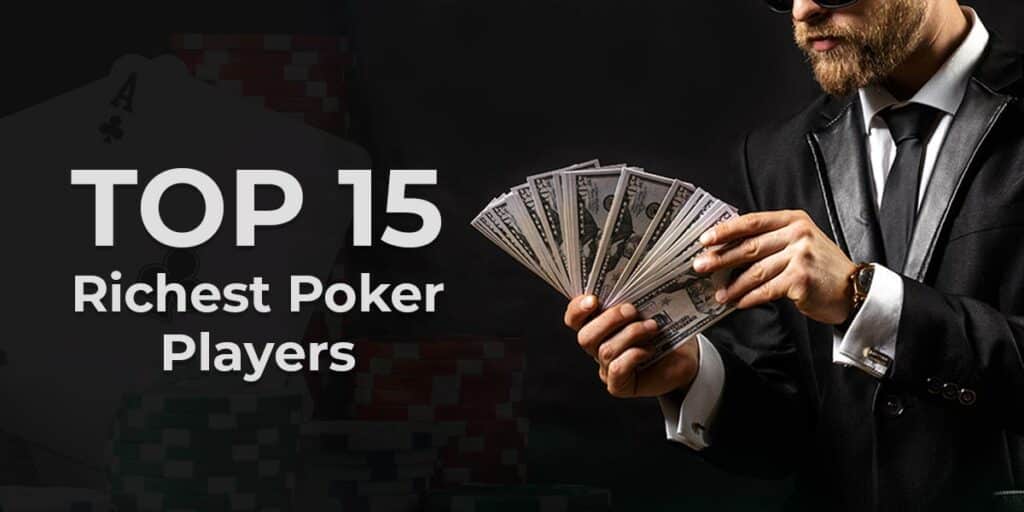 We’ll put you up to speed with 15 of the world’s wealthiest poker players, including Dan Bilzerian, Daniel Negreanu, and Vanessa Selbst, but also some lesser-known names. These poker pro players have managed to gather real fortunes in the process.

Do you want to know how much their skills have earned them? Keep reading to find out more about their legendary matches and where they are now.

Also known as “The Magician”, Antonio Esfandiari was born in Tehran, Iran. His family moved to California when he was 9, and he currently lives in San Francisco, California. His net worth is greater than $26 million.

Antonio’s passion for poker started when he was invited to join a Hold’em game. At first, he worked as a professional magician, but soon started making waves with his unbelievable poker skills.

His first tournament brought him close to $1.4 million in 2004. In 2012, he won the biggest prize of his poker career, a staggering $18.3 million. However, he was defeated two years later by Daniel Negreanu.

The Canadian player of Romanian origins has a net worth of more than $42 million. He won 6 WSOP bracelets and  2 WPT championship titles. According to him, ever since he was a child, he thought one could do anything he wanted in life.

Keeping his optimism, when he turned 21, he went to Las Vegas to become the best player. That’s not how things turned out at first. He had lost big at least 4 times. Still, not giving up made him the greatest player in history.

The 43-year-old player from Riverside, California, made around $20 million from playing online poker. Phil started playing against his co-workers back in the ‘90s, but went on to be deemed ‘the Tiger Woods of Poker”.

His other nickname would not reflect his potential just as much. In his teenage years, he was known as “No Home Jerome”. He got the nickname while playing in Atlantic City with a fake ID.

He has won numerous tournaments, with his most recent win being the 1st place at a high-stakes poker tournament in 2020, bringing him $856050. Luckily, Canadian online casinos have a wider range of minimum bets, so you don’t have to place Ivey-level stakes to enjoy a round of poker!

Antanas Guoga is the real name of Tony G. Born in Lithuania, Tony didn’t show interest in poker in his early years. When he was 11, he moved to Australia, where, among others, he’d spend time repairing cars.

He was involved in politics, as a member of the European Parliament, up until 2021. However, he resigned from the Parliament to focus on his businesses and play more poker.

His net worth of $18 million may have been accrued through other means as well, but the poker tournaments he won through the years had a say without a doubt. His highest single tournament prize was €100000 in 2018.

“I don’t care about money,” says King Kenney. That didn’t stop him from winning over $20 million in one go, his largest ever single payout. Through the years, the numbers kept growing, and his net worth reached $56 million, with a large proportion of it generated at live poker tables.

Owning a fortune did not change his mentality. Bryn Kenney is among the highest earners in the poker world, and he’s renowned for his trademark stakes and rock-hard self-confidence.

You can train yourself to become as good as Kenney, but you’ll need time. Double your bankroll on the spot with a first deposit bonus for extended play time. Pair it with Kenney’s winner attitude and you might convert your bonus funds into your real money after meeting playthrough requirements! Still, make sure poker is among the eligible games of your promotion first.

His most significant one-time win was $367800. After a lifetime of high-stakes poker sessions, the 87-years-old player claims he can no longer play for hours.

Still, that didn’t stop him from moving to Las Vegas, where he can keep playing a casual round from time to time.

Playing poker is not the only thing Ferguson masters. Apparently, he also possesses the impressive ability to throw cards so fast they cut through a melon.

His highest poker prize was $1500000, but his current net worth is exponentially larger, clocking at $80 million!

Both his parents have doctoral degrees in mathematics, so playing poker may seem like a surprising career for their son. Still, a lot of poker books consider mathematical abilities a powerful asset for poker, so it makes perfect sense!

Most people know Dan Bilzerian for his extravagant lifestyle, which he doesn’t hesitate to display on social media. However, Bilzerian is also a poker fan, and a pretty decent player.

His passion brought $10.8 million into his accounts after a single playing night. It happened in 2014, so he had enough time to make more. His net worth is currently estimated at $200 million.

You don’t always hear about women making history in this field. Still, Vanessa Selbst managed this feat, becoming the first woman to reach no.1 in the Global Poker Index. Born in Brooklyn, she graduated from Yale in 2012.

Annie Duke was also among the best globally at some point, but she retired in 2012. Annie was introduced to poker by her brother, and played her first match at 22.

Some see her as a controversial figure, but it’s difficult not to be impressed by her success in the poker world. She’s won over $4 million over the course of her career, the most significant being at the 2004 WSOP Tournament of Champions, where she left with $2 million.

Annie Duke claims to have integrated psychology, economics, neuroscience, and decision making in her poker matches, and you can hear about her experience in an episode of the “Investor Hour” podcast.

Liv’s poker winnings come in at over $3 million, which is surprising for someone with a background in astrophysics. She defied all odds when she won the Global Poker Index European Female Player of the year no less than 3 times.

Poker may have been one of her greatest passions, but her main focus is science. She works as a science communicator and has a knack for counter-intuitive thought experiments. If you want to hear more from her, you may take a look at her TEDx talks.

Maria Ho is of Taiwanese origin, but she became an American when her parents moved to Arcadia, California. Little did they know that their daughter, then 4-years-old, would become a great name in the world of Poker.

Drawn to the psychology and competitive spirit of it, she started playing poker in college. Now, her net worth is over $2 million!

Her “Pokerness,” Vanessa Rousso, won over $4.5 million from tournaments in her career spanning more than 10 years. Rousso won her highest prize in 2009, worth $962958.

Being a professional poker player is not her only occupation. “Lady Maverick” is also an attorney, television personality, and a DJ.

Originally from Nashville, Tennessee, Kathleen is one of the few players who won $1 million in a single tournament. She was actually the first woman to get her hands on such an incredible prize.

“PokerKat” won her first poker tournament in 1994 and got her WSOP bracelet in 2004. Her worth is now estimated at over $6 million, after 345 successful poker tournaments.

Loni’s passion for this game came from her father, Joel Harwood. She started by playing online and grew to become one of the richest poker players ever, with total winnings amounting to over $2 million. She owns 2 WSOP bracelets.

You can follow in her footsteps by playing at the best poker sites, but keep in mind to always choose platforms with high traffic, otherwise you might not play for significant prizes.

Canadian players who wish to reach the same level of skill as these professionals should start training. If you’re a beginner, it’s best to take it easy at first, and start with a no deposit bonus. Practice and boost your skills without paying anything. Later, you might see some results and, maybe, make it on our list!