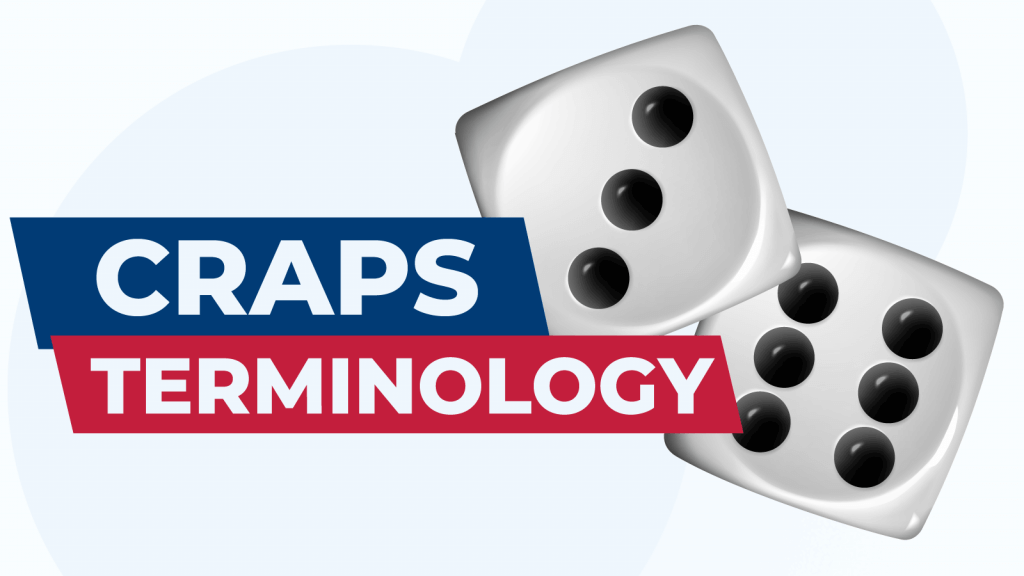 If you are just getting into the game of craps, there are a bunch of terms, calls, and sayings that you need to be familiar with to fully understand the game. This is where we jump in and explain what they all mean.

Aces – This term refers to the dice roll coming out at two ones. Players also like to call this outcome snake eyes.

Arm – When someone says ‘arm’, they don’t refer to an outcome in the game. Instead, this refers to players that could manipulate the game’s odds by throwing the dice to a specific set of numbers to get a certain outcome.

All the Spots We Got – A call that players make when they think the next roll will turn out to be 12, as in 6+6.

Any Seven – This is a bet made by a player who thinks that the next roll will be a seven, no matter the combination.

Advantage – A term that refers to the house having an advantage during play.

2 Way – This is when a player places a wager on themselves and the dealer or the house.

Black – This term refers to the chips that are usually used at a casino, which are $100 chips. Most of the time, the dealer is the one that makes a call like this.

Back Line – It refers to an area on the craps table. This is where you are able to play the ‘Don’t Come’ bet.

Behind the Line – An area on the craps table where you place your chips/bets.

Betting Right – A betting term used when a player places a ‘Pass Line’ bet or a ‘Come’ bet.

Betting Wrong – This refers to a player betting against the dice roll. It means that they will be placing a bet in the ‘Don’t Pass’ and ‘Don’t Come’ areas.

Big Eight – A call made by a player betting on an 8. This also means that an 8 will come up before a 7.

Bix Six – A call made by a player betting on a 6, also meaning that a 6 will be thrown before a 7.

Bones – You will hear players say bones instead of dice, as this is another name for it.

Big Red – This is another term that refers to betting on a 7. A player will make a bet on any combination that results in a 7.

Boxman – This is the supervisor of the craps table.

Boxcars – A call made for a bet on 12. There are various ways to make this call; some players call it midnight.

Boys or the Boys – A slang players use for the craps dealers in both land-based and live casino games found on gambling websites.

Buffalo – This is another bet call when players want to place wagers on each one of the hardways and any 7.

Bring Out – This is a call strictly made by the stickman on the craps table.

Colour In – Players will use this term when they are cashing out smaller value chips for bigger value chips. This call is made when a player is about to leave the table.

Cold Dice – An expression used by the players, which means that the dice they are throwing aren’t passing.

Capped Dice – A slang term players use, which means that the dice they are throwing are crooked.

Center Bets – Center bets or propositions bets are a bet type in craps that are placed on the center of the table. They are single-roll bets, and some even consider them the costliest type.

Come Out Roll – This term refers to the first outcome of a roll in a betting round.

Craps Check – A type of bet made during the ‘Come Out’ roll; most likely a craps number bet in order to hedge your ‘Pass Line’ bet.

Cold Table – Term players would use when they aren’t getting any points.

Don’t Come Bet – A type of bet in a game of craps where a 7 will be thrown before the point is rolled.

Don’t Pass Bet – Another way of calling or placing a ‘Don’t Come’ bet.

Double Odds – This is a type of bet which is double in size of your ‘Pass Line’ bet or ‘Come’ bet.

Easy Way – It refers to rolling a certain number with any combination without using a pair.

Edge – The advantage that the house has over the players in all the Roulette game versions, including live casino and classic Craps online titles.

Even Money – A term used for any type of bet that gives players odds of 1:1.

Front Line – Another area of the craps table where you can place your ‘Pass Line’ bets.

Free Odds Bet – When you make a ‘Pass Line’, ‘Don’t Pass’, Come’, or ‘Don’t Come’ bet, you increase the wager that you have made by double.

Garden – A slang word that refers to the ‘Field’ bet.

George – A name referring to a certain player. If a member of the casino crew calls a player George, it means that they leave big tips.

Green – A term referring to certain chips on the table. In most casinos, green chips are the ones that are worth C$25.

Harway Bet – A type of craps bets where you place a bet on the outcome to be 4, 6, 8, or 10, with the combination of two identical numbers.

Hop Bet – When a player makes a wager for a certain number to be thrown in the next roll.

Hoping Hardway – A type of bet where a player wagers on the next roll being a certain pair.

Horn Bet – A player will make this bet when they think the next roll will be 2, 3, 11, or 12. If one of the numbers wins, you get that bet; however, you lose the remaining three.

Horn High Bet – A type of bet similar to the ‘Horn’ bet, however, one more unit is placed on one of the selected numbers.

Hot Roll – This term refers to a player that is continuously hitting his rolls for a long period.

Hot Table – A term players use when they think the table they are playing on keeps on giving them the outcome they desire.

Insurance Bet – This is a type of bet players make to ensure they win. They will make two or more bets, so if one fails, the other wins.

Lay Odds – A type of bet that can be placed after a point has been established and the player has won a ‘Don’t Pass’ bet.

Line Bet – A type of bet where players place wagers on a ‘Pass Line’ or ‘Don’t Pass Line’.

Layout – The term for the surface of the craps table where every type of bet can be placed.

Loaded Dice – A term players use when they think the dice have been weighted or messed with to have certain outcomes.

Little Joe – This is a slang term players use for a pair of twos.

Marker – The plastic disk used to mark the point. It has two printed sides, one with ‘On’ and one with ‘Off’.

Mark the Point – It refers to when the dealer puts the puck on the point number.

Midnight – Another term used to call out a 12 on the next roll.

Odds Bet – Also called ‘Free Odds’ bets. They commonly occur after a ‘Don’t Pass’ or ‘Pass Line’ bet is made.

One Roll Bet – A type of bet that will be resolved in the following roll of the dice.

Off – A term that is used by a player when they want to cancel their bet if they don’t think they will win on the next roll. Another meaning is that with the ‘Come Out’ roll. a point hasn’t been established.

Off and On – A term a dealer will use when they payout ‘Come’ bets which were made on an already placed bet.

On – A term that is used when your bet is active on the next roll or when the ‘Come Out’ roll has been established.

Out 7 – A term that refers to a player getting a 7 after the point has been established. After that, the next player throws the dice.

Pass Line – The term refers to the area of a craps table where you can place your ‘Pass Line’ bets.

Parley – A type of bet where players can take all of their winnings from a previous bet and add them to the next roll.

Pay Off – A term used when the winnings are given to the player.

Pay Out – A check with the winnings given to the player after they finished playing.

Proposition Bets – Also called ‘Center Bets’ because they are made on the center of the table, these are a type of bet that many consider being the riskiest bets on a craps table.

Rack – A rail located on the craps table where players can place their chips.

Rail – It refers to the area on the player’s side of the craps table.

Seven Out – A term used when a player rolls a 7 after the point has been established.

Shooter – Refers to the player rolling the dice.

Stickman – A casino staff member who handles the dice with a long stick.

Skinny McKinney – When a player rolls a 7.

Toke – Refers to the tip given to the craps casino members.

Working Bets – All bet types which are active on the table.

Winter on the Dark Side – A slang term meaning the next roll will be a 3.

World Bet – Placing a bet on the ‘Horn Number’ but adding the 7 as well.

Wrong Bettor – A term that refers to the player that bets against the shooter in the ‘Don’t Pass’ line.

Yo or Yo Eleven – A slang term that refers to the number 11.

Craps can be quite fun, but knowing the lingo is a must. As you can see, there are plenty of terms, calls, and slang words that you need to know when starting to play online casino Craps titles. The sooner you learn them, the quicker you can turn to the game and become a Craps pro when playing in the best online casinos.