How to Play Shot Roulette 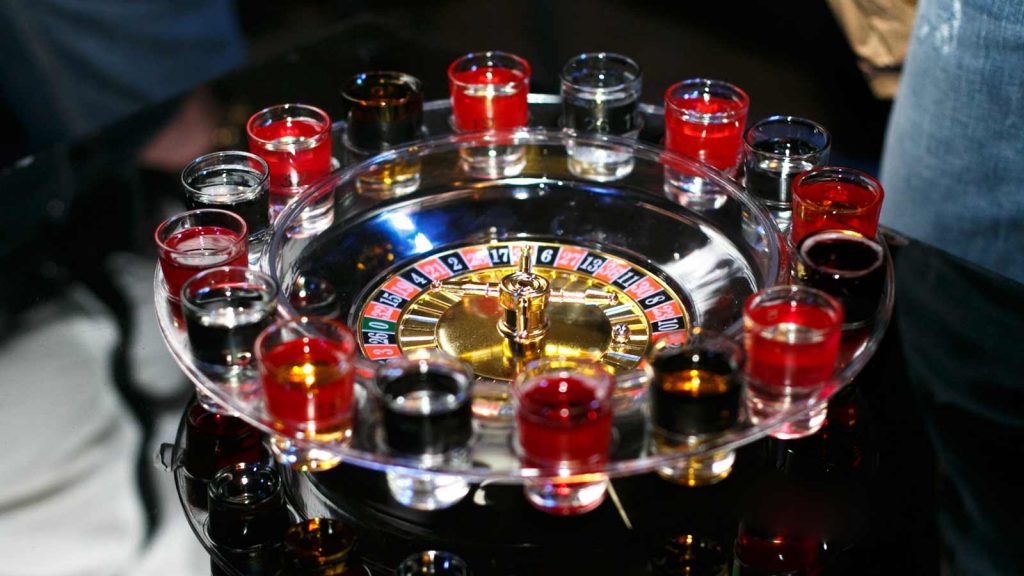 Drinking isn’t recommended before any activity, except for Shot Roulette.

Liquor is actually required in this drinking Roulette game.

Find out everything you should know about the Shot Roulette game on this page!

What is Shot Roulette?

It features a drinking Roulette game wheel with several shot glasses fixed on the edges of the wheel.

Each of the shot glasses has two numbers that align with the numbers found on the wheel.

What do you need to play the Roulette shot game?

Thankfully, this is not Russian Roulette, where you need a gun and bullets to play. The Roulette shot game requirements are pretty much non-lethal.

Besides a Roulette wheel, you also need

However, if you don’t have a Roulette wheel, you could use a spinning bottle or even cards and dice. As long as it fits the gameplay, you are good to go.

If you don’t want to go through the stress of finding all these, you can purchase ready-made drinking Roulette game sets.

You don’t need to learn many rules to enjoy a game of Shots Roulette.

Sometimes, the rules even depend on what you and the other players decide. However, here are the basic rules associated with a standard drinking Roulette game.

Players shouldn’t smell the contents of the glasses

The point gets defeated if players sniff the content of the glasses.

Leave everyone guessing when you drink the shot glass you landed on.

Alternate the alcoholic and non-alcoholic beverages

Another way to maintain the element of surprise in this game is to alternate the alcoholic and non-alcoholic drinks when filling the glasses.

Also, if you’re using water as your non-alcoholic beverage, it’s advisable to go for clear spirits like vodka. This way, players won’t be able to distinguish between them.

Establish an order right from the start

You have to decide the order in which participants are going to play from the very beginning of the game.

Here’s how it should go

The rule is to wait after spinning the Roulette wheel to see where it lands.

It’s this movement that lays the foundation for the suspense of the game.

Any attempt to touch the wheel during this period will definitely impact the outcome of the spin.

If the ball lands on 0, the designated person must drink all the shots

Another interesting rule that you can introduce to your drinking Roulette game is if the ball lands on 0, the designated person that spins the wheel must drink all the shots.

However, if you feel like that would be too much, you can make everyone drink a shot instead.

How is the winner crowned?

The way each game ends depends on you and the other players.

You can play this game until no shots are left, or you can keep refilling the glasses until one player manages to drink a specific number of shots, for instance.

How to play Shot Roulette step-by-step

As you may have noticed, this isn’t a strategy game. If you’d rather play a table game that requires more technique, try Classic Roulette on one of the many Canadian online casinos.

The table above shows the standard alcohol tolerance of an adult male and female.

However, take these estimations with a grain of salt: they are theoretical and may not relate to your case.

Alcohol tolerance varies from one player to another, and it can be influenced by factors such as:

While drinking Roulette allows you to take a drink or two, you shouldn’t leave everything aside and get drunk.

Whether it’s a game or not, excessive alcohol can damage your health.

Drink safely and play the game responsibly. More specifically, drink only the amount of liquid your body can tolerate.

If you start feeling tipsy and you’re unsure of what’s next, then it’s time to end the game. The fun never stops; you can always play later.

There are several variations of the Roulette shot game.

Many people have found diverse ways to make this drinking game exciting. Below, we covered the basic rules of popular Roulette game variations.

Here is how to play the first Russian Roulette drinking game:

By playing the mini-shot Roulette variation, you even get to learn about how a real Roulette wheel works.

If it sparks your curiosity about the real casino game, you’ll be able to practice it with reliable platforms on CasinoBonusCA.

However, it’s still a fact that gambling and alcohol don’t mix very well. To keep it fun, make sure to impose healthy limits and drink responsibly!