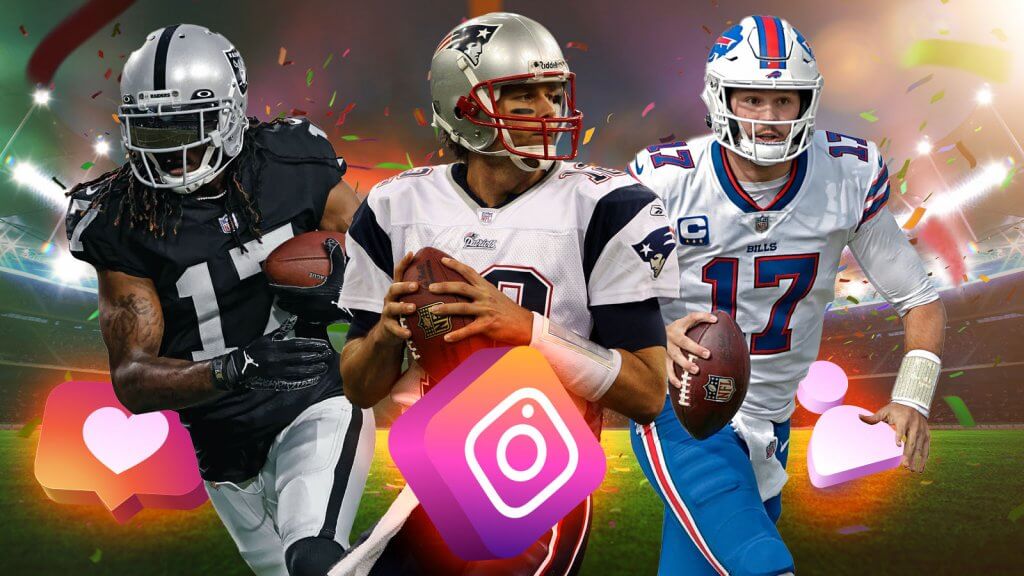 The Super Bowl is just around the corner, and fans have already picked their favourites. Read on to find which footballers have managed to catch our attention.

Casinobonusca’s online casino bonus experts used Social Blade. This tool collects data and information to analyse the progress and development of social media accounts to compile the data. These statistics are up to date as of late January 2023.

The National Football League, widely known as NFL, has gained a tight community of fans due to its entertainment and avid competitiveness. As the NFL includes only high-level players, the dynamic of the match keeps supporters engaged at all times, and the outcomes can often be surprising.

Thus, the NFL is more than just a sports competition; it has become a North American tradition. With a history of over a century, the NFL remains one of the most anticipated football tournaments. The competition culminates with the Super Bowl, held on the first Sunday in February.

Professional NFL players make a fortune promoting brands they are passionate about. From new online casinos to clothing and banking options, footballers close deals worth millions of dollars.

Tom Brady, Tampa Bay Buccaneers player, is for the fourth time at the top of the most popular NFL footballers and the oldest active football player. The 45-year-old football player gained almost half a million new Instagram followers since the start of the NFL season in September 2022, and his net worth is estimated at around $250 million.

As for Brady’s other sources of income, social media, especially Instagram, plays a significant role through his sponsorships and partnerships. The California-based footballer owns his health and fitness brand, TB12, which he often promotes on Instagram.

Among NFL’s greatest quarterbacks, Josh Allen surpassed one million followers in the past months since the season started. He gained over 200K new followers and is often present on Instagram promoting brands such as CashApp, Microsoft Surface, and Hyundai.

His endorsement deals include Nike and Tommy Armour golf, while also being a brand ambassador for New Era Company.

Maintaining a steady position in the top 10 NFL players for the past four years, Patrick Mahomes II gained over 100K new followers on Instagram.

With a massive following of over 5 million, Mahomes often promotes brands such as Adidas, State Farm, and BioSteel Sports on his official Instagram page.

With a net worth of $25 million and endorsement deals with big companies like Pepsi, Snickers, Taco Bell and Jordan, Adams often posts on Instagram promotional content with these companies.

Los Angeles Rams’ Aaron Donald is considered one of the best defenders, and he remains among the top NFL players this year, too.

With a net worth of $60 million, Aaron Donald earns approximately $500K annually through his partnership with brands such as Nike, Pizza Hut, Pepsi, Hyundai, and others.

In the list of the best NFL players of 2022, Cooper Kupp comes in fourth place. In 2021, Cooper Kupp was classified as the best pass catcher in the NFL’s top 100 players.

With a net worth of $18 million, Cooper obtains considerable income through sponsorships and partnerships he promotes on social platforms.

Most recently, the NFL professional player shared his collaboration with Nike with his fans.

Another athlete with a large community of followers on social media is Jalen Ramsay, LA Rams’ wide receiver, who made a significant impression on his supporters after a successful 2021 NFL season while dealing with two injuries.

His net worth is around $50 million, with an annual salary of $21 million.

Aaron Rodgers is a figure in NFL’s history after becoming the second player to win MVP four times consecutively. The 39-year-old player has a net worth of $200 million and an Instagram following of over 2 million.

Regarding his promotions on Instagram, Aaron Rodgers has a partnership with State Farm, an American insurance company, which brings him an annual $3 million.

With an Instagram following of over 1 million, T.J. Watt continues to draw attention after last season’s NFL Defensive Player of the Year award.

Steelers’ 28-year-old player has a net worth of $10 million, and on Instagram, he shares everything about his partnership with Capital One, an American banking company.

Apart from his collaboration with Capital One, T.J.Watt is also sponsored by Panini and Six Star Pro Nutrition.

The 23-year-old crushed last year’s NFL season; during this edition, he is expected to make history again. The promising Indianapolis Colt player has a net worth of almost $16 million, and his business ventures help him build a considerable income.

As for his social media, he is bound to gain more followers, which is why Taylor closed some significant partnerships with brands like Under Armour.

On his official Instagram page, Jonathan Taylor promotes his Toppers pizza franchise, a Wisconsin-based business, through which he gives back to his community by raising awareness of the brand.

As they have a great following on social media, most brands sign partnerships, collaborations and sponsorships with players with a good reach on this platform. The NFL’s players earn thousands of dollars on each post, as this marketing strategy is quickly becoming a lucrative business.

In the past years, many footballers started promoting top online casinos, becoming brand ambassadors for web-based casinos with profitable promotions and casino bonuses.