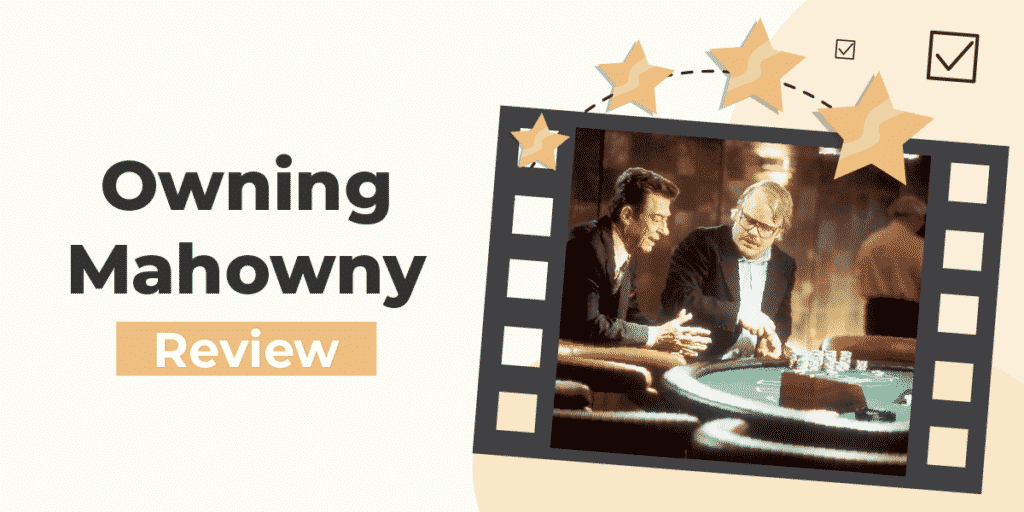 A True Story of C$10mil Stolen & Lost on Bets

This Owning Mahowny movie review for Kwietniwoski’s 2003 film will provide the details regarding all film specifics and our conclusion.

Dan Mahowny (Hoffman), a gambling addict from Toronto concocts a plan to embezzle millions from a large bank he’s employed at. Using his wit and exploiting the system’s weaknesses, he gambles staggering amounts of money in Atlantic City.

Dan Mahowny has an incredible mind for illegal sports bets and Roulette or Craps table. But is he talented enough to juggle his vice, his job, the special agents investigating him, and his lover?

Owning Mahowny highlights the human and institutional weaknesses through the lens of greed, addiction, and love, believable character development, and a masterfully crafted story.

Film score: What we grade & why!

Most sombre dissections of movies are prone to snoring coming from unengaged readers. We wish to give you the technical and cinematographic essentials while keeping the discussion light-hearted and reader-friendly.

Why We Write About Film

Our contributors may not publish pieces in film criticism journals, but they all are avid moviegoers. Consider these film reviews to be just a redaction of the endless back and forths regarding film favourites that we would have around the water cooler on a regular.

What We Do Better

The plus that we can bring to movie criticism is our expertise in online casinos and the Canadian iGaming market. Thus, we have a house edge in analysing films centred around gambling, betting, or games of chance in general.

How To Read Our Marks

We truly love it! By the time credits roll, we are left still wondering about and wandering around the inner space of the film.

We then spend several hours in the dark, still grasping at the film’s memory not quite wanting to move on. Certain scenes regularly pop into our minds, from time to time.

There was something about this movie, but it was an overall miss. The directions taken were correct, but the completion may have proved lacklustre. We would have wished to see more effort put into the right areas, but it was by no means catastrophic.

A reshoot of some scenes was needed.

We want to grab the camera and reshoot it in its entirety. The failures go beyond near-misses into flop territory. It is as if we watched the bloopers of a better film that will never be.

Certainly, we have seen B-movies and we wish our one and a half or so hours returned.

The “Making Of” process & notable backstories

The film’s plot, as unbelievable as it seems, is based on a true story. The character exquisitely brought to life and light by Seymour Hoffman existed in real life.

The real “Dan Mahowny”, too, embezzled over 10 million CAD from Canada’s Imperial Bank of Commerce. He was consulted for the book’s writing, based on which the film is adapted and when the filming started.

Rumour has it that he was quite satisfied with how the artists portrayed him in both mediums.

The real individual’s actual name is Brian Molony, and he was sentenced to six years in prison, out of which he served only two.

He was represented by Canada’s defence icon Edward Greenspan. After release, he settled down and had three children, and worked as a financial consultant.

*Many of the buildings that are represented in the movie have the same role, name, or look as they do in present times. Natives of “The 6” will see familiar environments and almost feel the ice-cold draughts of winters, especially in the wide shots of the grey streets with violent bursts of snowstorms.

Bringing the Protagonist to Life

This role proved once again the fine acting skills of late Seymour Hoffman. We agree with several critics’ opinions that his acting style somewhat ignores a critic’s ever-present eye, thus paradoxically adding life and believability to its performance. There’s no unnecessary sappy pathos pulling at the viewer’s strings and begging to pity the character.

The spectator can simply sit back and watch Mahowny’s life breaking apart.

Our opinion on the story

You don’t have to be a player or to have played a luck game to get sucked in the story.

In fact, the plot and the way it unfolds are the main strengths, besides the staring actors’ chemistry and how they put up the appearance of legit people caught up in a stealing and gambling web.

You’ve probably got it by now…The leading role is sublimely constructed and presented. As always, Philip Seymour Hoffman applies his renowned acting skills in creating a spectacle that we guarantee you will enjoy.

We want to draw your attention to the way Dan Mahowny and Victor Foss (John Hurt), the casino’s head, interact. Initially, Foss watches the lead through the security footage and plays him like a pawn, then tries to manipulate him with money, food, and sex. Dan Mahowny refuses and goes back and forth with thousands of dollars in winnings: an excellent metaphor for the highs and lows of gambling addiction.

You can tell that the story is well-written when you can guess what the movie’s end will be from the first minutes, but you’re still glued to the screen. That’s precisely what happens here.

The film is adapted from the 1987 book entitled “Stung: The Incredible Obsession of Brian Molony,” which was a homeland best seller. Gary Ross and Brian Molony were consulted throughout the pre-production and post-production, adding to the authenticity.

For those who lived in 80s Toronto, the images and aesthetics are accurate to a T. Those who didn’t can think of this movie as a time capsule for “The 6” 40 years ago.

Otherwise, the whole sensory experience is shadowed a bit. It might be because we’re too enticed by the acting or because the lights give everything an overly grey allure, even in the highly luxurious and flashy 80s casinos and 5-star hotels from Atlantic City or Vegas.

Naturally, this may be a valid artistic direction. It could address Mahowny’s own subjective tint placed over the cold Canadian cityscape. However, particularly pleasant it is not.

Let’s start with the good news: the shots of Niagara Falls are superb. The costumes are slick and appropriate for the characters, with sharply-dressed casino bosses. In contrast, Dan Mahowny wearing his oversized suits slightly chaotically.

And he doesn’t wear a coat?? In the Canadian winter?!?

However, the whole image and art direction are a bit lacklustre. As we follow the most challenging psychological moments of Dan, it seems to us that a kind of gleam may be missing.

We’re going to be honest here. There was nothing that stood out from the point of view of the soundtrack. Really… we can’t provide you with anything too interesting here, except for the very intense moments when Dan Mahowny is facing his addiction.

Yes, when the focus is strictly on the lead and his internal struggle about gambling excessively, then the stretched and tensed enough score translates the experience perfectly. Dan Mahowny knows his doings to be wrong, exaggerated, and toxic. But his demons win, and they keep winning; this is well-represented via the score.

Image and Sound: A Complete Experience?

Not quite. In this case, we have to admit that the cinematography (with its highs and lows) mixes decently with the score. But, as we’ve mentioned, it feels like it lacks a few dynamic combinations and surprises.

It might be that your rooting for Dan Mahowny, his games, and his love needs to be coupled with grandeur in visuals and score, beyond the character development.

Richard Kwietniwoski managed to bring his experience in directing drama movies and adapted it excellently to the story about battling addiction.

Throughout his career, the director also experimented with screenwriting, and it shows! The result was a best-seller created for the silver screen, which in no time became a must-see for Canadian gamblers. And with the hindsight of the time of writing, we can guarantee it stood the test of time.

When we rate this aspect of movies, we always ask ourselves: “Did the film hit what it aimed for?” Then we proceeded to make a necessary office poll.

And here, there’s a clear and solid YES! Unnecessary, hard-to-believe plot twists do not override the story. What watchers need to take in is the heart-wrenching story of a man with wit and class that internalizes his struggles with gambling.

Kwietniwoski marches on the simple plan of allowing a great cast to carry a real-life story while giving them minimal intervention via director suggestions. There’s harmony in simplicity and vitality.

Role in pop culture: Almost there ?

We’ve got to admit that we really liked this film (isn’t that a tad evident by now?). Still, the initial public response was minimal compared with the overwhelmingly positive reviews from critics.

From what we could uncover from Box Office numbers, the movie earned a little over 1 million dollars upon its theatre release in 2003. Considering that the budget was 10 times more, it could have performed much better.

But, from the point of view of real-life gamblers from CasinobonusCA, this movie can come back as a casino cult classic from Canada. Maybe we’re witnessing a Renaissance of classic casino movies!

There’s a consensus in our office: Owning Mahowny can effortlessly stand next to shining stars like Casino (dir. Scorsese, 1995) and Ocean’s Eleven (dir. Soderbergh, 2001), which, as we all know, shock the audience with their incredible cast.

This is because the acting levels are A-class, even for Hollywood standards!

What makes it unique, however, is the way it shifts the focus viewers are used to. The James Bond series and usual casino blockbusters focus on the action, crime, and redemption part of the story, leaving the casino scene as a mere background.

Owning Mahowny switches all these aspects behind, choosing to focus on the thrilling nature of gambling, especially as seen through the eyes of an obsessive and addicted subject.

You, as a viewer, get a show as much as you get a lesson in psychology. Most importantly, you get to perform an exercise in empathy.